Although it might seem that beautiful teeth are white teeth, it occurs that not to everyone.

There are cultures where bones, as an internal part of the body, are considered unclean and should not be shown. Displaying in their natural color is disguisting. This belief comes from Buddhism and is fortunately a relic of the past. However, there are still places in Asia where we can meet young and old people with black teeth.

A common reminant of this religious disgust at the look of natural teeth is an exaggerated custom of covering mouth with a hand during a smile, which you have certainly seen many times in Asia. I saw it and was convinced that it is a result of complexes concerning the quality of the teeth of these particular people. But no, they are simply ashamed of their teeth whatever they are. I wonder if they would have covered them if they were black. Maybe they would like to try ohaguro, which is a procedure of blackening teeth? It is done by lubricating teeth with a solution of iron and acetic acid, to which powdered acorns and tannins are added. Such a preparation should be applied at least once a day. In addition to the obvious aesthetic values, ohaguro supposedly has a bactericidal effect and prevents caries.

The custom of Ohaguro was considered a beautifying ritual in Japan until the end of the 19th century. At first it was reserved for the aristocracy, although quite fast it became popular among other social classes so prostitutes or geisha could do it too. When a little girls’ teeth started to blacken, it was concidered as a sign of adulthood and their willingness to become a wife. When the Japanese government banned the practice of ohaguro , the custom of doing black teeth slowly and gradually started to disappear.

Nowadays, the ritual of ohaguro can only be seen in hanamachi – Japanese geisha districts, where they dye their teeth just before being appointed geiko (professional geisha), or during some Matsuri festivals. It is characteristic that the teeth after ohaguro are evenly covered with black, as if painted with black nail polish.

People with black teeth can also be found outside Japan, e.g. in Thailand, the Philippines, Indonesia or Vietnam (South China Sea basin). In these places, black teeth are a sign of chic (almost like golden ones ;). But they are not evenly varnished, only spotted with a black and brown sludge.

This is nothing else but the effect of chewing a pepper called betel. It is a popular drug, known since antiquity, which gives the effect of stunning and anesthesia to the inconveniences of the outside world such as hunger. The side effects of its use are black teeth and red saliva.

Although little known to us, betel currently uses about 10-20% of the human population, which makes it the fourth most popular drug in the world behind caffeine, nicotine and alcohol. This is what this “chewing gum”  looks like, which you can find at every Thai market and buy for a penny: 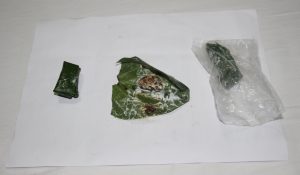 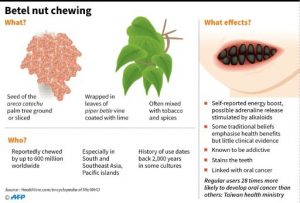 But it’s not worth it… Apart the addiction, betel causes discoloration and tooth diseases, and even oral cancer as it has been said above.

At the end, a cosmetic curiosity: the real art is such chewing of betel that the red saliva is evenly distributed over the mouth with the tongue. What for? To make mouth beautifully red and tempt men. Isn’t a lipstick better for that?

This website uses cookies to improve your experience while you navigate through the website. Out of these cookies, the cookies that are categorized as necessary are stored on your browser as they are essential for the working of basic functionalities of the website. We also use third-party cookies that help us analyze and understand how you use this website. These cookies will be stored in your browser only with your consent. You also have the option to opt-out of these cookies. But opting out of some of these cookies may have an effect on your browsing experience.
Necessary Always Enabled
Necessary cookies are absolutely essential for the website to function properly. This category only includes cookies that ensures basic functionalities and security features of the website. These cookies do not store any personal information.
Non-necessary
Any cookies that may not be particularly necessary for the website to function and is used specifically to collect user personal data via analytics, ads, other embedded contents are termed as non-necessary cookies. It is mandatory to procure user consent prior to running these cookies on your website.
SAVE & ACCEPT