Very rarely, because hardly any lacquer is halal. Do you know this word? The word Halal (Halaal) that is commonly associated with diet, has a much wider meaning and means simply everything that is allowed in Islam.

And now let me tell you a story. Not Arabic, but and Asian one. It is believed that nail polish was invented in China about 3000 years BC. During the Ming Dynasty, long, well-groomed nails were considered a sign of high origin. They were simply a proof that a woman does not have to do anything. Two colors were used then: red and gold, and women from outside the aristocracy, who had their nails done this way, had their hands or even heads cut off as a punishment to pretend someone of higher origin. 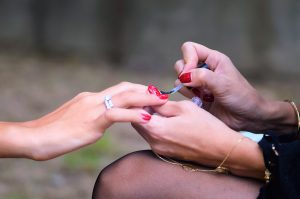 Nail varnishes were also used in ancient Egypt and by the Incas, but they did not have much in common with the composition of their present equivalents. It is believed that first varnishes consisted of a mixture of beeswax, protein foam, gelatin, arabic gum and plant dyes. However, the invention of modern nail varnish dates to 1932 and unfortunately has more in common with car varnish than plants.

Nail varnish through the widespread availability and popularity seems to be a safe and noninvasive beauty product, which nowadays even small girls play with.

Unfortunately, modern nail polish consists not only of pigments, but also nitrocellulose, dibutyl phthalate, toluene and formaldehyde. In fact, all the above mentioned substances can be hazardous to health because they are either strong allergens or irritating substances that can, but do not have to, deregulate the hormonal or nervous system of a user. On top of that, I know from my own experience, is a fact that colour on the nails is addictive. I just love it and I can’t stop wearing it.

For this reason, most nail polishes do not gain the acceptance of mujtahid, a scientists who decide what is a halal and what is its opposite – haram. As I read on a website of one of Arabic manicure salons, there is, however, a certain paradox. It is based on the fact that you can apply a haram varnish to yourself, but you can not pray while wearing it.

In order to pray, Muslims have to do the ritual of ablution (washing the body), which includes rinsing whole hands and nails with water. And nail polish, unfortunately, interruptts this process. This applies to classical and UV varnishes, as well as gels and acrylics. Therefore, varnishes have been mostly disqualified in this community.

In order for Muslim women to have their nails painted, a completely new formula of nail polish was invented. It allows water and air to pass through all coats of such polish that has been put on a nail. The new formula is not based on nitrocellulose, but on a polymer that can also be found in contact lenses. I was nicely surprised and proud to visit shops of a certain Polish brand during my travels (e.g. in Dubai or Australia). This brand owes its global success also to the introduction of breathable & halal nail lacquers.

Photo by rashid khreiss on Unsplash