As I have promised more posts about cosmetic ingredients, today I am writing about a plant that is told to be a natural wealth of Iceland. Interestingly, it is a plant from the celery family. Honestly? I think I know it from Polish meadows and I would never thought it could be a legendary plant that have played an important role in Icelandic history.
It is the so-called “angelica”, more commonly known as “angelica archangelica”. Is it true that this longer version of the name is the most beautiful? Something worthy of the name must have miraculous, protective, or even salvific properties. It is said to have. Nomen omen. 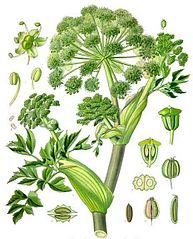 This plant is very resistant to the harsh weather conditions in northern Europe, especially to its long-lasting low temperatures. Why? Because it has survived the ice age. According to many sources, the angelica was used by the Vikings for hundreds of years. It helped them to survive the chronic cold as food and treat many ailments as a medicine.

The legend says that it was the angel himself who appeared to the monk in his sleep and said that the plant would heal the plague of that time. And so it was.

Among the many healing properties of this legendary plant are of course the cosmetic ones: angelica has an anti-inflammatory, antifungal and microcirculatory effect. Angelica is therefore widely used not only as a herbal raw material, but also as a cosmetic ingredient.

In general, all Icelandic plants are unique. They have very little light, so they have a short growth period. They grow in soil with a unique volcanic composition in a clean, unpolluted environment. All of this makes them super-powerful. Their healing and cosmetic potential is higher than of plants of the same species from other regions. The same applies to algae and all other marine ingredients. The fact that they can withstand temperatures below zero means that they have developed antifreeze protection mechanisms.

Now, thanks to many years of herbal practice and science, we can also use them to protect our skin.