Jeju is an island.

Called a South Korea’s Hawaii, Jeju Island is one of the seven wonders of nature. It is  both the largest island in South Korea and the smallest province of this country. It was established as a Biosphere Reserve by Unesco in 2002 in order to promote and demonstrate a balanced relationship between man and the biosphere. This is probably why as many as a half of all electric cars in South Korea is registered in the province of Jeju. What is more, by 2030 Jeju declares the end of fossil fuels in favour of the clean energy. 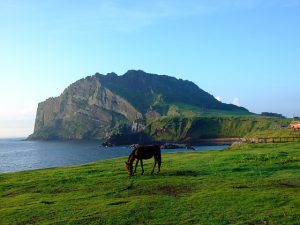 Jeju has a problem though. It is a very popular tourist destination, especially among the Chinese. They call it the “Island of Gods”. Jeju became even more popular when several Korean TV novels (the so-called k-dramas) were shot here, especially the very popular Dae Jang Geum (“Jewel in the Palace”). And what tourists usually do? They destroy and pollute places they visit.

And Jeju is unique and worth saving. For example, “sea women” – freedivers, known as haenyeo, live here. They collect mainly octopuses, sea urchins and sea snails in the Yellow Sea, without the help of a breathing apparatus or other professional diving equipment. They last underwater for 2-3 minutes and have only fins, goggles and gloves. A 5-7 hour working day may result in a harvest of 30 kg of seafood. The average age of these women is 60 years. This indicates a decline in interest in this traditional but very dangerous and unhealthy profession.

Jeju Island is also the place of origin of many valuable cosmetic ingredients, such as green tea, camellia called “winter rose”, prickly pear, lotus flower, red ginseng and many Korean herbs. These raw materials are not only the basis of Korean but also foreign cosmetics. Their purity and care effectiveness (high content of antioxidants and vitamins) is so high that many smaller and larger cosmetic producers from all over the world have started to use them in their recipes. 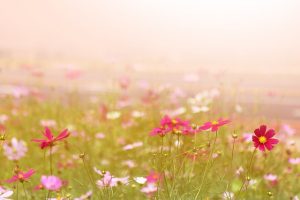