As we have a strong trend towards natural cosmetics at the moment, I will try to give you some insight into certain plants, namely herbs and their use in cosmetics. They are the basis of natural cosmetics, which derive their power, as the name suggests, only from the mother nature. And since nature is so omnipotent and there are so many herbs, different in different parts of the globe, this is of course another topic, on which one could write a thesis. Notice that herbs are so versatile and popular that they are used in most cosmetics. Unlike animal fats, milk and egg proteins, collagen, lanolin, beeswax, honey, keratin, elastin, silk, chitosan (there may be a few other cosmetic substances of animal origin), they can also be used without any restrictions in vegan and vegetarian cosmetics. Because, remember this well, a natural cosmetic does not have to come from plants only. 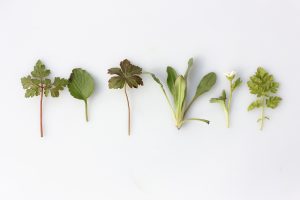 What are herbs? Of course, plants, but not all of them. Only those that affect human health. Herbs have been used in cosmetics always, from the very beginning of its existence. It was mainly on them and other ingredients of plant origin, with a more modest share of animal fats and minerals, that the recipes for cosmetics were based until the nineteenth century, when, as a result of advances in science, humanity began to widely use chemical compounds. The use of chemical compounds in cosmetics turned out to be cheaper and yet cosmetic preparations were highly effective. Therefore, the use of herbs and natural ingredients began to be considered relics. Fortunately, however, in modern, good cosmetics chemistry goes hand in hand with nature, clinging to the best of both worlds. The area of cosmetics that deals with herbs is called phytocosmetics. Natural cosmetics are also named phytocosmetics.

Due to increasing health awareness and saturation of our organisms with ubiquitous chemical substances (allergic reactions, hypersensitivity of the skin), nowadays we are dealing with the reverse trend to the so-called organic products, that is, cosmetic preparations whose ingredients are natural and pure, that is, deprived of chemical ingredients obtained by synthesis. Thanks to their natural origin, herbal extracts are easily and well assimilated by skin, hair and nails. They help to cure skin diseases and beautifully nurture beauty. This does not mean that they do not cause irritation or allergy. Sometimes they cause, also have a shorter durability than their chemical counterparts (lack of preservatives), but despite this they return in style not only to the shelves of drugstores and bathrooms, but also to beauty parlors and SPA centers in the form of treatments for face and body, aromatherapy. Cosmetic organic products, the so-called natural cosmetics, can be distinguished by independent certificates such as Demeter, Ecocert, Cosmebio and information about their authenticity should be sought where? Of course, always and above all in their composition.

We can find many important biologically active compounds in plants. For cosmetic purposes, whole plants with their fruits are used, as well as individual substances isolated from them. The effect of these active substances on the skin depends on their chemical structure. We often find them in the descriptions of cosmetics, so it is worth knowing what is going on to choose the best cosmetic tailored to our needs.

In plants, the active ingredients responsible for the action are mainly the following active substances:

How to obtain cosmetic raw materials from plants? An overview of the methods, some of them can be done at home.

One of the best methods of obtaining high purity plant substances is extraction with high pressure carbon dioxide (300 bar) under supercritical conditions at low temperatures (approx. 30°C). Quite a low temperature of the process does not degrade the active ingredients of the plant and thus does not reduce their quality. A very important stage of the described extraction under supercritical conditions is the last stage of the process – the expansion phase, in which the pressure is reduced. At this stage, the liquid phase of carbon dioxide changes into a gaseous phase, so that the whole solvent can be freely evaporated from the extractor. This results in 100% pure plant extract.

Fresh herbal spirit extract – lump is tinctures made from fresh plants using boiling spirit; it is obtained by throwing freshly harvested herbs into hot alcohol, heating the mixture to boil within 20 to 30 minutes, leaving it to stand for a few days, then squeezing and straining the extract.

Examples of uses of herbs for specific skin problems:

How can herbs help oily skin? What cosmetic ingredients should people with oily skin look for?

Recommended are camomile, sage, rosemary and witch hazel extracts that have a purifying, astringent and anti-inflammatory effect, and antiseptic essential oils such as tea tree, juniper, petitgrain, lemon, bergamot, cedar, lavender, camphor and sandal that limit the production of sebum. Essential oils from eucalyptus leaves or cardamom seeds have a toning and purifying effect.

What herbs care for the delicate eye area? What to look for in eye phytocosmetics?

It is also worth reaching for herbs if we have discolourations of the skin. Hydroquinone was considered one of the most effective depigmentation agents since the 1930s. However, due to the spread of information about the dangers of its use and possible side effects (it is suspected of carcinogenicity, darkening of the skin instead of brightening during long use), since 2001 it has been banned in EU countries for use in cosmetics. On the other hand, its plant derivatives are used, e.g. arbutin, which can be found in bergen, bearberry and blueberry leaves. Research confirms that in case of skin brightening they are a safe and effective alternative to hydroquinone. Birch extract containing betulin also has a brightening effect.